We're told that "the messaging" around the vaccine is working. But why is it so inconsistent? Why have Fauci & the WHO changed their tune on herd immunity over the last month? What happens to the accepted science when it becomes excepted science?

For some reason, the WHO chose November to alter the definition of “herd immunity,” quietly omitting the fact that, before November 2020, common wisdom has always been that herd immunity can be formed through exposure to the virus. On November first, the WHO’s website reflected that.

Now the WHO asserts “herd immunity is achieved by protecting people from a virus [with a vaccine], not by exposing them to it.” 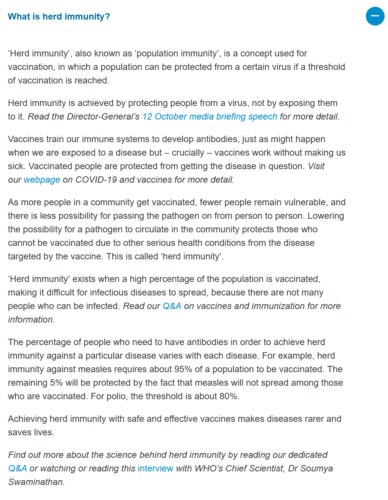 At the start of the pandemic, Fauci claimed 60-70% of people would need to be infected with and recovered from or inoculated against the virus before herd immunity could be achieved.  Beginning around a month ago, however, that creeped up to “70 – 75 percent,” and recently up to “85 percent”. So we’ve gone from maybe 60% of people achieving herd immunity through naturally contracting and recovering, or being inoculated from the virus, to eighty-five plus percent of all people absolutely must be vaccinated before herd immunity can be achieved.  This is what folks in the tech industry call “scope creep,” where the scope of a project is gradually expanded to encompass functionality that was never discussed in the initial estimate.

Tony Fauci reportedly revised his stance “partly based on new science, and partly on his gut feeling that the country is finally ready to hear what he really thinks,” so apparently lying to the public is totally fine if the public is “not ready” to hear the truth.

This reminds us of the claim reported earlier this month that aliens live among us, but have been kept under wraps because “humanity isn’t ready.”

“Space aliens have reached an agreement with the US government to stay mum on the experiments they conduct on Earth — as well as their secret base on Mars — until mankind is ready to accept them,” the NYPOST reported. Like the WHO and Tony Fauci, the aliens have have determined that our tiny little monkey brains aren’t equipped to handle the truth – until they’re sure it is too late for us to do anything about it. Like the WHO and Tony Fauci, aliens have been performing “experiments” on human populations without our informed consent, with the blessing of our own governments.

“The messaging” is working, but it’s gobsmackingly inconsistent. What reason could the WHO possibly have to redefine the common wisdom about herd immunity now? Why is Fauci coming clean with the American people days before Christmas? Fauci said that “weeks ago, he had hesitated to publicly raise his estimate because many Americans seemed hesitant about vaccines, which they would need to accept almost universally in order for the country to achieve herd immunity,” Zero Hedge reported. “We really don’t know what the real number is. I think the real range is somewhere between 70 to 90 percent,” Fauci told the New York Times. “But, I’m not going to say 90 percent,” because of course we wouldn’t want people scrambling to avoid a looming vaccine mandate.

“When polls said only about half of all Americans would take a vaccine, I was saying herd immunity would take 70 to 75 percent. Then, when newer surveys said 60 percent or more would take it, I thought, ‘I can nudge this up a bit,’ so I went to 80, 85,” percent Fauci said. That sounds very scientific.

Does that even make sense? “I had to lie about my estimate of how many would need to be vaccinated at first, because I didn’t want to scare people away from taking the vaccine – but now that several vaccine candidates exist and two have been given Emergency Use Authorization by the FDA, guess what, almost everyone absolutely has to get the vax”? Oh and by the way, “herd immunity for COVID can only be achieved through vaccination”? 🤨

According to the CDC, as of December 18th, out of about a hundred and thirteen thousand people who have received the Pfizer vaccine, about three thousand have been stricken with side effects which have made it impossible for them to return to daily life. That’s about two point three percent. 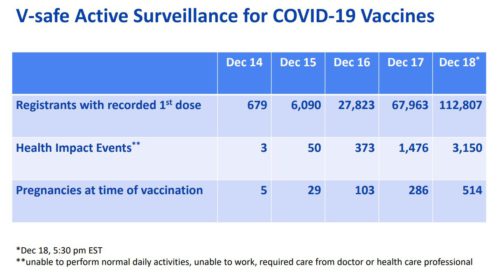 If 85% of all Americans were to receive the Pfizer vaccine, it follows that nearly 600,000 people will succumb to that same fate, and be “unable to perform normal activities, unable to work, or require care from a health care professional” for an indeterminate period of time (forever?) after receiving the vaccine.

Although Worldometers reports that the USA has a mortality rate of about three percent, we believe that number trends lower, at less than one percent. Meanwhile a staggering 13.3% of COVID victims become long haulers, according to current statistics, meaning that on our present course, 43.8 million Americans will become long haulers, or suffer long-term COVID symptoms, as a result of our decision to refuse treatment to COVID victims until they are sick enough to be admitted to an ICU. We simply do not know how these people will be impacted by the vaccine, and it depends on a variety of factors.

We simply do not know a lot of things about these vaccines. Will they confer immunity? Will subjects continue to spread the virus? Will we be able to stop wearing masks? Can we resume normal life after everyone gets the vaccine? How might the vaccine impact fertility? Why are some vaccine recipients testing positive for HIV? The “experts” insist that nobody knows the answers to these questions. Those same “experts” implore all of us to get the vaccine just as soon as possible, but not before those less fortunate have all received their double-dose.

Interesting that, despite these alarming statistics – and certainly not because of them, the first wave of vaccines is being targeted to the most disenfranchised among us: minorities, those with autism and Down syndrome, “essential workers,” and finally, the elderly, in that order.

The list of priority vaccine recipients is starting to look more and more like the Nazis' list of undesirables; poor "essential workers," non-whites, and disabled people.

I'm sure it's just because we've come so far as a loving, caring society…