The confusion around who is fighting on the front lines for the Trump campaign and who is fighting for "We The People" - and where the distinction is between the two, has caused many to wonder wtf is going on.

Suddenly, a lot of what traditional media would have us believe is “nut job conspiracy malarkey” seems to be being blown wide open. Though you wouldn’t know it from consuming news from traditional outlets, the shit is hitting the fan. Recently on the “Thrive Time” radio show Lin Wood said in no uncertain terms “the media lies, that’s what they do these days – they’re propaganda tools for the people trying to take over our country.” Mr. Wood goes on to explain that Dominion Voting Systems, a Canadian company, was using software developed in Venezuela on machines with Chinese made components and sending the digital “ballots” of US citizens through Amazon servers in Frankfurt, Germany and finally tabulated in Barcelona, Spain. You would think this might alarm the folks who spent the last four years screaming “Foreign Election Interference,” but apparently this is the kind of election meddling that liberals don’t mind.

Lin Wood says “Communists have infiltrated our country, by ideology, by corruption, by extortion, for the last twenty years… and they’ve decided, it’s 2020 that they’re going to try and take over our country.” Not only that, he seemed to suggest that in the coming days, elite pedophilia networks and “Satanism” among those who have occupied the Oval Office would be revealed, and offenders held accountable. He goes on to implicate every American president from Bush senior to Obama in treasonous schemes that he says “would shock the American people”.

Years ago, Sidney Powell famously went into detail about salacious evidence on Anthony Weiner’s laptop, and said she had heard that seasoned officers were made physically ill by what they had seen on it. This has been fodder for Pizzagate and Qanon conspiracy theory for years, as Sidney Powell is among the most reputable sources to confirm the scuttlebutt around the Weiner laptop.

Sidney Powell said that what she plans to reveal in the coming days “will be Biblical,” suggesting that thousands of officials should face criminal prosecution for their roles in organizing and carrying out this fraudulent election. “The voting corruption spans generations of Democrats and Republicans,” Powell said, and went on to say that she can’t unsee what she has seen, but she will make sure that every American sees what she has seen.

Powell has said many such things recently. “We are on the precipice of – this is essentially a new American revolution,” she said during a viral interview with Lou Dobbs. She implicates all of the media, Big Tech and Silicon Valley, and says she is going to “release the kraken” – a promise that the MAGA community does not take lightly, and that has sparked wild speculation about what form this alleged Kraken will take. Our own FEC Chair said that if Sidney Powell says there was widescale voter fraud, he believes her. You can’t get much more official than the chair of the FEC. After five years of hearing endless rumors about unchecked corruption and unspeakable abuses perpetrated in our name by our elected officials, talk like this from the President’s own legal team has the hopes of many Americans at an all time high, and the suspense is palpable.

But there’s also an element of incredulity – after watching Trump talk of “TREASON!” for years and have nothing come of it – now the country is finally going to get justice, as an election hangs in the balance and the nation is teetering like a stationwagon on a cliff?

Then, the Trump campaign issued this statement:

A bit later, Sidney Powell issued this statement in response: 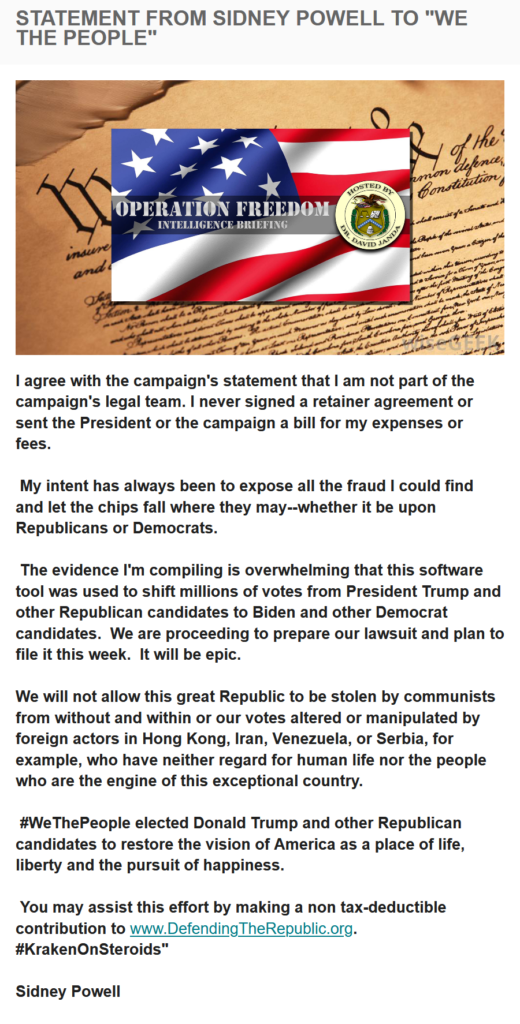 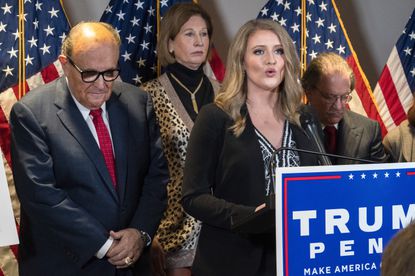 Which is weird, right? Because Sidney Powell just appeared at a press conference right alongside Rudy Giuliani like last week. Similarly, Lin Wood said that the Trump team had called him in to help and he was proud to answer the call when he appeared with the Trump legal team recently, but now it’s supposed to have been common knowledge that Sidney and Lin are acting as independent agents, representing “We the people” – not team Trump. This is disconcerting for the many people who have been following Sidney and Lin with bated breath since they began planting seeds that the election fraud investigation might just be linked to the broader inquisition many on the right have been pining for. Because although they’ve given voice to some things that may cause normies to spit-take, for the most part, Lin Wood and Sidney Powell are tapping into taboo common wisdom, and bringing it into mainstream awareness.

For many conspiracy theorists and people who have been paying attention, it’s been a bit gobsmacking to watch these two go out and get all the media riled up about true facts that have never seen so much light of day, thinking they were representing the leader of the free world, but it’s also been heartening. If POTUS is so assured that he can prove these things, they hoped, with investigations underway for years now and justice always dangling just out of reach like a golden carrot, that he would allow his surrogates to speak such things aloud in the presence of the turncoat press, then surely at least he knows what our current plight actually is, and so knowing, will fight to the bitter end to protect America from what lies on the other side of his premature exodus. If, however, they’ve overstepped the bounds of acceptability as determined by the arbiters at the Trump campaign and are being ousted – in the middle of the fight of their lives, to pursue these injustices without the full force of Trump’s administration behind them, many in the thick of this fray will believe all hope is lost, and finally succumb to feelings of the inevitability of defeat. Because if Trump cannot stand by his soldiers on the front lines of this very strange war, how will he be able to stand up to all the powers that oppose him and the will of the American people?

Sure enough, the day after this “distancing” of their most vocal advocates from the Trump legal team, Emily Murphy GSA finally capitulated to the will of the mob and certified the transition, paving the way for Biden to begin receiving intelligence briefings. The collective heart of half of the American public sank a little bit when that was announced, while the other half – folks who have been publicly threatening Emily for the last several weeks, are rejoicing. Trump is promising that he will continue fighting and says he believes he will prevail, but there is an unease settling around those who have managed to stay positive about his prospects thus far, and it is starting to feel, in certain circles, as if this is the beginning of the end. However, if you examine Ms. Murphy’s letter more closely and compare it to the letter that Obama received for his transition, it seems as if this might actually be an arrogance trap for Biden – documenting that she has been harassed and threatened so Biden can go ahead and “request” his transition services anytime, and he has – but it does not say that he is entitled to said services.

It is now November 23rd, 2020, as I write this. On December 11th, Congress will have to reauthorize another stop-gap budget, or government will effectively grind to a halt. The electoral college doesn’t convene to make their decision until the 14th of December. We are most of a year into a global pandemic which has devastated the Main Street economy, while Wall Street and big box retailers are raking in money hand over fist, and still there has been scant relief for families and small business owners. There are still runoff elections pending in many crucial districts but the GOP is about to experience its own version of #DemExit, as MAGA abandons all who have failed to stand with them behind their president, and the Great Reset looms over this nation like a specter.

The fate of the world hinges on what happens in the next three weeks. Who will win, a global cabal comprised of the entire Democrat party, most government agencies, all countries aligned with the NWO, our once free press, Big Tech, and millions of useful idiots, or a conspiracy theory? 🤞😬

Chelsea Belle is "Cassandra," apparently. Truth & facts in the spirit of parody. My dot com was seized for discussing cures. Branded a "conspiracy mill" by NYT. Building one rn

You’re almost out of free articles.

Suggested Websites For You

Because we can't talk about it anywhere else.
If you are brave

More From The Conspiracy Mill